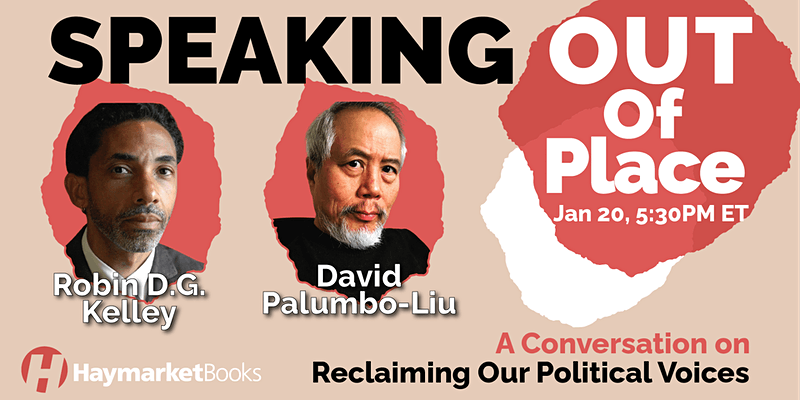 Speaking Out of Place: A Conversation on Reclaiming Our Political Voices

Join David Palumbo-Liu and Robin D. G. Kelley for an urgent discussion of Palumbo-Liu's new book and the politics of our moment.

Joined renowned scholars and activists David Palumbo-Liu and Robin D. G. Kelley as they discuss Palumbo-Liu's urgent new book Speaking Out of Place. Speaking Out of Place asks us to reconceptualize both what we think “politics” is, and our relationship to it. Especially at this historical moment, when it is all too possible we will move from Trump’s fascistic regime to Biden’s anti-progressive centrism. We need ways to build off the tremendous growth we have seen in democratic socialism, and to gather strength and courage for the challenges, and opportunities that lie ahead.

As Nick Estes said of the book, “It’s not enough to be against the rising tide of authoritarianism and climate chaos. David Palumbo-Liu examines how only through “a positive obsession with justice” and a collective willingness to learn to speak a new language and remake the places do we have a chance at saving the planet and building the world we all need.”

Get the book, Speaking Out of Place, from Haymarket: https://www.haymarketbooks.org/books/1797-speaking-out-of-place

***Register through Eventbrite to receive a link to the video conference on the day of the event. This event will also be recorded and live captioning will be provided.***

David Palumbo-Liu is a professor of comparative literature at Stanford University. He is on the organizing collectives of the US Campaign for the Academic and Cultural Boycott of Israel and the Campus Antifascist Network. His writings have appeared in The Guardian, Jacobin, Truthout, Al Jazeera, The Nation, and other venues.

Robin D.G. Kelley is Gary B. Nash Endowed Chair in U.S. History at UCLA and the author of many books, including Freedom Dreams: The Black Radical Imagination, Race Rebels: Culture, Politics, and the Black Working Class, and Hammer and Hoe: Alabama Communists During the Great Depression.